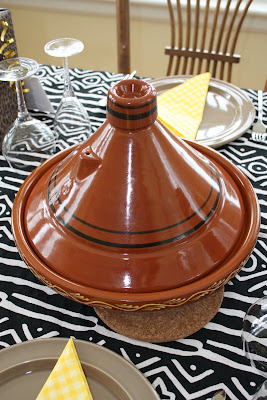 Feeds 4 or 6 depending upon appetites, plus provides “left-overs”

We experimented with our new tagine using this chicken recipe.  The word tagine refers both to the cooking pot and the stew cooked in it.  A tagine consists of two parts, a round pot (often clay) and a conical cover with a small hole to allow steam to escape.

This tagine is from  lataginerie.com  in .  We purchased ours at the Blue Olive International Market located in   What to look for when purchasing a tagine, click here.

To learn more about how to prepare a tagine for use the first time, click here.

Start with about a cup of chopped onions sprinkled with oil and a bit of salt; pile the onions in the middle of the bottom of the tagine. Add some butter.  Next add about 3 pounds (or whatever amount is needed) of cut up skinless, boneless chicken which has been flavoured with: 2-4 minced garlic cloves, 1 full teaspoon of ginger (or 1 tablespoon of grated and peeled fresh ginger), ¼ teaspoon turmeric,  ¼ teaspoon paprika and a pinch of saffron threads.  Spices can be adjusted to taste, of course.

Pile the chicken like a pyramid on top of the onions.  Add enough water or chicken stock to keep the tagine moist, perhaps a cup or more.  Place tagine with cover in an oven heated to 325 degrees Fahrenheit for about 30 to 40 minutes, until chicken starts to become barely tender. Stir it occasionally.

Be careful removing the tagine from the oven, as it is slightly unwieldy when full of meat and sloshing liquids.  This recipe can be done on the stove top if one has a heat diffuser.  I don’t, so cooked this in the oven.

Return covered tagine to oven after adding more liquid if needed.   Simmer gently until chicken is tenderer, maybe another 30 minutes…depends upon the amount of chicken.

Turn chicken again and add 2 tablespoons of bitter-orange marmalade, 2 teaspoons cinnamon (or a cinnamon stick), 1 teaspoon thyme (or a sprig of thyme), 2 cilantro sprigs and 12-18 chopped apricots.  Cook in the oven for 10-15 minutes more uncovered, until chicken is very tender.  Mine took double this time as I had lots of chicken in the tagine.

While the tagine is in this last cooking phase, heat one tablespoon grape seed oil in a small heavy frying pan.  When the oil shimmers, add ½ cup(or more) pine nuts mixed with ¼  teaspoon turmeric and ¼ teaspoon paprika, also a little cayenne, if you want extra heat.  Put pine nuts aside for later.

Remove tagine dish from oven, whenever the chicken is tender to your liking.  Discard herb sprigs and cinnamon stick.

Stir in chopped cilantro (about 1 tablespoon) and the toasted pine nuts.  Garnish with lemon wedges, if desired.

Serve with couscous or brown rice or quinoa.  Any of these can be cooked with the chicken if you add enough liquid or cooked separately…whichever you prefer.

Lug the whole dish to the table and place it on cork pads.  With the cover on, the tagine will keep the food handy and hot as long as you are enjoying your supper.

Wines with the Grenache grape go well with this tagine dish, and with the cooking process.  I’ve tried these with success:  Oomoo Grenache Shiraz Mourvedre 2006 from McLaren Vale , Wolf Blass Red Label Shiraz Grenache 2009 from .

Freshen your wine and enjoy.  It is delicious!

There are varied tagine recipes on line if you want to try others. 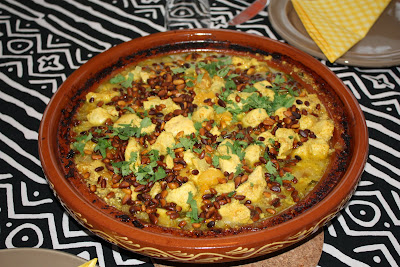 Thanks for the recipe and tips. I'm trying this right away.

It is absolutely scrumptious. You'll be happy with the meal. Thanks for the comment. Carol