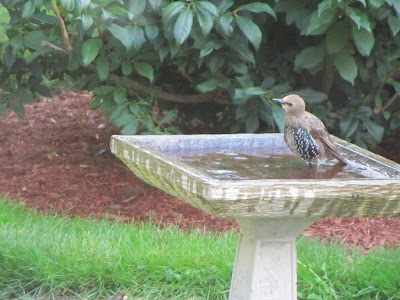 The European Starling was introduced to North America in 1890 and 1891, when about 60 individuals were released into New York's Central Park.  It was part of the local Shakespeare society's plan to introduce all the birds mentioned in their favourite author's writings, according to Roger Burrows in Birds of Atlantic Canada. 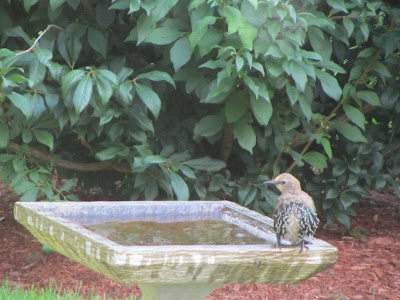 Since the 1890's, the starling spread quickly across the continent, often at the expense of other native, cavity-nesting birds.  Despite efforts to control or to eradicate the European starling, it continues to claim wider territory.

European starlings are perhaps the real originators of the "flash mob" concept!  They are boisterous, loud, travel in large groups, making a constant stream of rattles, whirrs, and whistles.  Much of the year, they wheel through the sky and mob lawns in big, noisy feeding flocks. 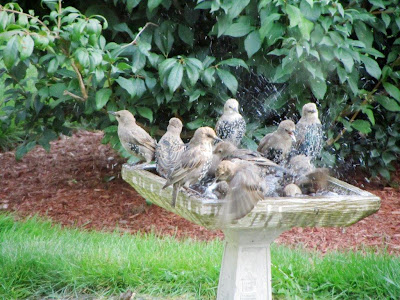 In summer, these stocky dark birds with short tails, triangular-shaped wings and yellow beaks are actually iridescent purplish-green.  In winter, their plumage changes to brown covered in brilliant white spots; their bills to brown.  Notice the exotic polka dot colouring in this "flash mob" captured by my sister and brother-in-law, at their backyard birdbath. 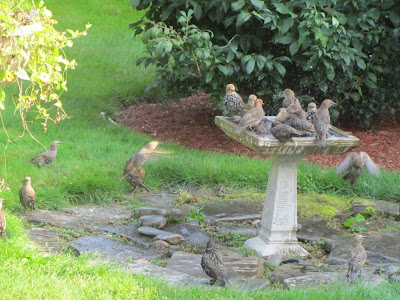 I also saw starlings just getting into their fall colours, at the Halifax waterfront last Saturday.  As we sat eating our lunch and enjoying the boats on the water, these aggressive birds wandered the boardwalk demanding french fries and any other left-over food from patrons at the Historic Properties.

I did not immediately identify them as starlings, as I thought they kept their dark glossy colours all year round.  As they flew over the water, I saw that in flight their wings are short and pointed, which makes them look like small four-pointed stars.  While doing research, I learned that this star shape is what gives them their name.

These photos were taken by my sister and brother-in-law.
If you click on any of the red words, you will go to another website with additional information.

I just love this post on the Starlings, Carol..and what a coincidence...
John and I were sitting at the back of the studio having a barbeque a couple nights ago and all the while watch the power lines fill up with one after the other of a flock of Starlings.. they were catching flys and flying back to their place on the lines and making their crackly crunchy warblely noise, the best they could .. they remind of the birds that have to try hard.. harder than all the rest... maybe that's why they all stick together... they seem to have to use so much effort to fly, too.. not really graceful at all... But all of a sudden while watching them sit there and interact I fell in love with their antics and their fight to survive and appreciated them in a new way...
Thanks for this.. and I never knew they changed color.

Gwen, thank you for your comment. You remind me that there is good and beauty and usefulness in everything in Nature!