Slow Dissolve into Drizzle and Fog 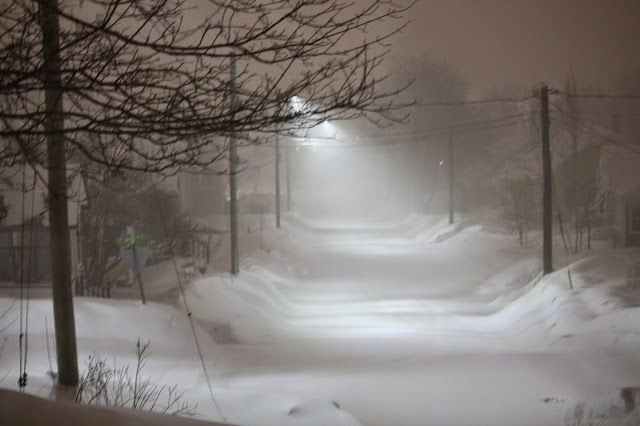 This week, my online studies are taking me into the world of "Formalism and Meter."  Discussions propose the idea that form can liberate the imagination, that the constraints of form can lead to new material and can be a way to generate new poems.

One of the forms we've studied is the pantoum, a poem of any length composed of four line stanzas. In each stanza, the second and fourth lines of each stanza serve as the first and third lines of the next stanza. And the last line of the pantoum is generally the same as the first.  The form removes certain elements of choice for the poet as one adheres to the rules. And that can be kind of freeing. It is a good form in which to tell a story, as the elements of repetition unfold just a bit at a time, as well as offering musicality in the retelling.

The following is a draft of my homework assignment.  I have revision to do, but wanted to share where I am to date. Also, I have discovered that I don't like writing in a controlled form, at least not yet.  I am encouraged to hear from others that this gets easier the more often one does it. I do hope so. Sometimes learning is such hard slogging.


Slow Dissolve into Drizzle and Fog

This memory returns each winter
with February thaw, the slush, black ice.
We skid and climb the foggy air,
and land, buried by snow.

Grey car, grey fog, grey morning,
we disappear under fog and drizzle.
I shovel fast to free you.
Twice, the tow truck drives by.

We disappear in this drizzle and fog,
after the skid and that slope of air.
The tow truck drives by us again.
Every winter this memory returns.

First, I really like the poem. I'd not heard of this form. I'm not sure I'd find it congenial, but I do agree that working with the discipline of a specific form has a lot to teach.

I've been working with Etherees. They're syllabic poems: ten lines, fifty-five syllables. Line one = one syllable, line two, two, and so on. I have found myself both enjoying them more, and finding it easier to incorporate meter and rhyme within the form as I go.

I've been missing you -- I have such a hard time keeping up with Blogger blogs that don't have an email alert option. But I've devised a new system for myself now -- maybe I'll do better!

Hello, Linda. Thanks for your comments. I'm not smitten with the pantoum form either but did want to try it. The form is supposed to have an end rhyme scheme as well, but I just couldn't do that. I had a difficult enough challenge with the line repetitions. I'll look at your suggested Etherees. Maybe they'll suit me better. Thank you again for your thoughts.