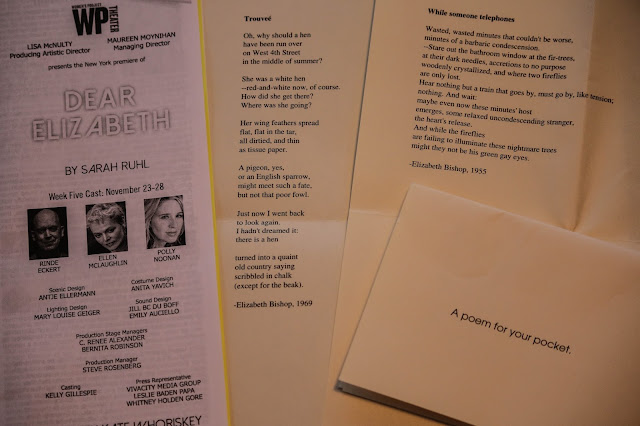 
It’s New York at the Women’s Project Theatre, a full house. The audience settles and reads the Elizabeth Bishop poems left as “A Poem for your pocket” on each seat. Programs rustle, anticipation mounts, the house lights brighten then dim, a cockroach scurries beneath a desk on the stage. We are there to watch Dear Elizabeth, a play written by Sarah Ruhl, originally published as Words in the Air in 2008.


The play is based upon the thirty year correspondence and friendship between the poets Elizabeth Bishop and Robert Lowell. Their relationship is complicated.


Pulitzer-winner Bishop, who was lesbian, was left financially stable enough to be able to travel as she wished, a love for travel reflected in her work.  Lowell, also a Pulitzer recipient was twice divorced and his third marriage ended when he died in 1977.


All the words in the play are taken from their letters and their poetry, and force the audience or reader to look at their lives not as story, but as lives lived.


Bishop’s and Lowell’s admiration for each other’s work is immediate and their letters are full of compliments and professional observations and suggestions. Their friendship is an ever-evolving affection, with each seeing the other as that rare person who understands the need for a balance of solitude and public image. There are oblique references to infidelity, depression and alcoholism. (BWW Review, Michael Dale)


The play begins with the poets as adults, so no mention is made of Elizabeth’s childhood in Great Village, Nova Scotia, her Canadian connection.


Dear Elizabeth unfolds as letters are read from two wooden desks placed on opposite sides of the stage. The cast frequently changes. The evening we attended, the actors were Ellen McLaughlin and Rinde Eckert, with Polly Noonan as a kind of stage manager, stationed in an upstage corner.


Familiar with the work of each of these 20th century poets, the play is a delight for me. As a poet, I value the profound effect of friendship and knowledgeable critiques of one’s writing, as well as the necessity of dealing with real life while writing.


I appreciate the kindness and generosity of my daughters in taking me to see Dear Elizabeth, as I know their own tastes would have led them to another sort of play. I thoroughly enjoyed myself, and appreciated the evidence of their recognition of me, as poet.


The cockroach provided a play within the play, scuttling around Rinde’s shoes during the evening. When foot work became too active, it took off for the safety of the travel props at the back of the stage.


Life intrudes into our stories without warning.

Words is colour will take you to another site with additional information, if you click on them.