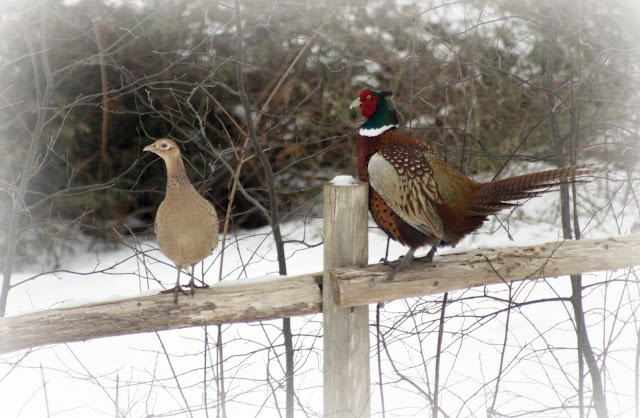 
They've begun chasing the females, trying to gain their attentions.  One amorous fellow spent most of the morning pursuing a dun coloured female.  She would neither allow him to approach closely, nor would she let him wander away from her, an elaborate game of hide and seek, of  "come here-get away."


He would run and chase to within a foot or two of the female, then position himself so she was standing beside him.  When he could see her watching, he would puff up his wing and neck feathers and would rapidly flap his wings.  With ear tufts erect and wattles turning bright red and swelling, the male displayed himself seeking her approval.

Nothing ventured, nothing gained, the quote goes.  But even though he ventured, the female pheasant isn't interested, not yet.

( A detailed description of pheasant mating rituals can be found here.) 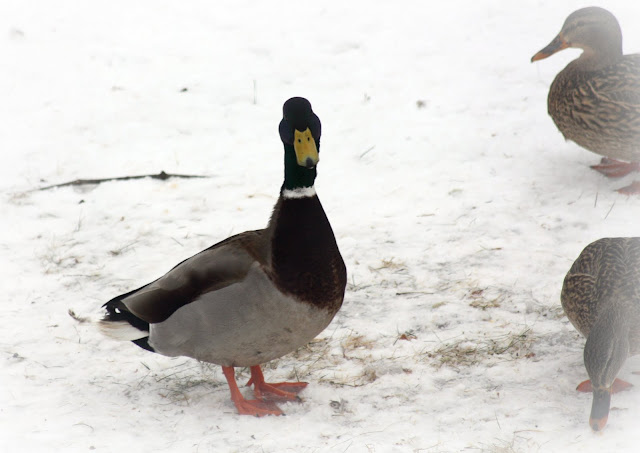 This Mallard male watched bemused.  He knows Spring is far off and eating cracked corn is the essential need until then.
Posted by Carol Steel at 5:38 PM

I think pheasants are hilarious, I love the way they are so reluctant to fly. That mallard looks really bemused!

It is entertaining and educational to watch the pheasants. They do fly but only in short bursts and usually to escape danger or another pheasant. When they run, they look like they are on fast forward; their little legs move so rapidly.