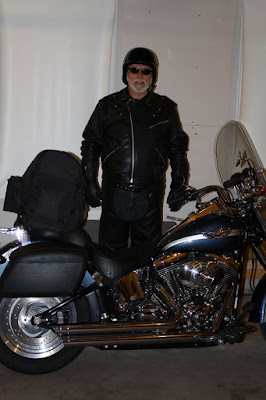 The Laconia Motorcycle Week, also known as Laconia Bike Week, has its roots dating back to 1916 when a few hundred bikers met at The Weirs (aka ).

Years later, the “Gypsy Tour” started in .  When it passed through , it kicked off the official Laconia Motorcycle Week.  This makes it one of the oldest Motorcycle Events in the and “’s Original Riding Rally.”

In the last 88 years it has also grown to be one of the largest Motorcycle Events in the and is part of the "Big Four".  It averages around 400,000 motorcyclists over the week long biker party and will continue to grow.

wanted to be sure not to miss this world-class event in and has been preparing for weeks to attend.  Most of that preparation consisted of polishing the Harley, installing wind deflectors, buying new boots and cleaning his leathers.  I wonder why, because he’ll come home totally bug splattered and wind burnt.

He will have a splendid party experience and will be able to spend all his time with motorcycles of every description; his idea of heaven.

Gary left early on Wednesday morning to drive down to with three friends.  They stopped in  overnight, and will again on the way home next week.  They won’t be killing themselves riding hard, as one guy has to stop to eat all the time, one has to stop to smoke and one, to pee.  Lots of stops and resting!

is happy to be travelling with these three, as they’ll set an easy pace with shared laughter, cold beer and lots of food.

They managed to book a convenient lodging just 5 minutes walk from downtown; had to book it at New Year’s to attain accommodation that close.  It has all the amenities: BBQ, walking distance to the stores, taverns and all the action, air conditioning, and a hilltop for viewing the bikes passing by, all 400,000 of them!

I haven’t heard much from him since he arrived in , except one bleary conversation with lots of laughter and music in the background and the slosh and clink of ice in a rum glass.

Have a great time ! 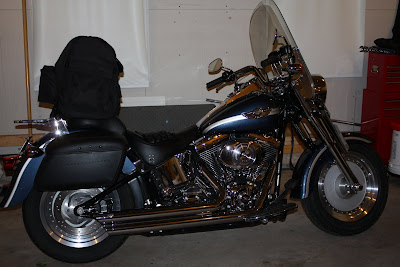 Both photos are mine.
Posted by Carol Steel at 6:45 AM