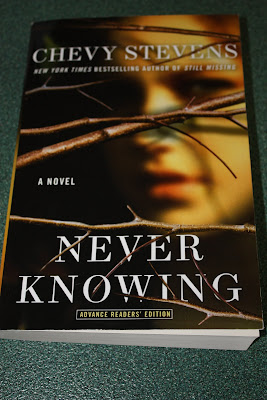 
Once I began reading Never Knowing by Chevy Stevens, it was nearly impossible to stop.  Every chapter, each one centered around a session with her psychiatrist and the ensuing dialogue between that advice and Sara’s strong-willed actions, urged me to keep on reading.

The novel focuses on a thirty-three year old woman, adopted at birth, and her search for her birth parents.  What she discovers is shocking—never knowing may have been better than knowing!

Just when I figure that I have the plot and characters all pegged, a new twist appears, throws me off-kilter and propels me on to the next chapter.  Chevy Stevens’ writing instantly captures my interest and weaves a spell that compels me to read until I have completed the novel.

Having worked for years in the field of mental health, I particularly enjoyed the accuracy and thoroughness of Stevens’ portrayal of the character “John.”

I recommend buying a copy of Never Knowing, when it is released on July 5, 2011.  The book will keep you on the edge, until you reach its end; you finally get all the answers, to questions that might have been better left--unasked.

Chevy Stevens, the New York Times bestselling author of Still Missing and of the soon to be released Never Knowing, grew up on a ranch in and still calls the island home.  A Canadian author!

I received an Advance Reader’s Edition of Never Knowing from Goodreads and ’s Press.  I received no remuneration for this review; it is simply my own opinion.

Want to know more about Chevy Stevens?  Check out  http://www.chevystevens.com/
or  www.facebook.com/ChevyStevens