Cats and No Sleep 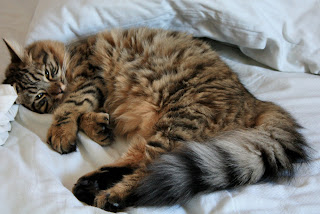 The cats woke me early today.  5 am is not a time I want to be awake unless by choice.  Usually when we settle for the night, the cats settle too, blissful to have a great warm bed with two human companions.  Last night one settled with us; two played and wrangled until 1 am.  The result:  four hours of sleep for me!   Cats are all sleeping now, catching up?

It has snowed and snowed and snowed lately; six major storms this winter, accumulating over 235 cm or 93 inches.  The town is zealous about ploughing and snow removal, cutting back the visibility-blocking banks, clearing packed snow around the fire hydrants and salting the slippery narrow roads.  Heavy machinery regularly passes through this quiet neighbourhood several times a day; more often during the night.  Lights flash, snow buffets and ice grinds, engines strain and back-up beepers pierce the hushed darkness.

Bleary-eyed from lack of rest, I theorize that the cats are disturbed by all this ploughing commotion; their small kitty brains fear habitat and home destruction from this onslaught of grotesque machinery and striking din.  I suppose this is so because the cats behave far worse on snowy nights.

Cats being cats and creatures long associated with independent and fickle natures, I can’t be sure that this IS the problem.  Just for experiment’s sake, I will close some doors tonight to separate us from the disturbances of these three furry night prowlers.  Maybe we’ll get more sleep tonight; maybe it won’t snow again tonight!  What are the chances?