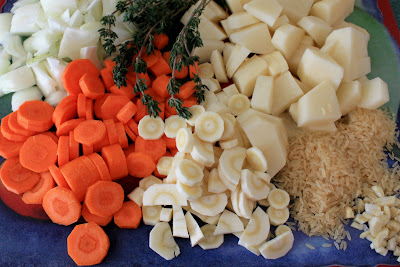 When I was ill, my friend brought me comforting food.  I cherished her thoughtfulness and her chicken soup, asked for the recipe and received the following:

“Hmmm!  Well, there was not a recipe but I think this is what I did.  Put low sodium chicken broth in a pot (used the boxed kind) and diced up some potatoes, carrots, added some rice and simmered for about 10 minutes.  Then I added two chicken breasts, cut in a couple of pieces and simmered another 10 minutes.  Next added some frozen peas and simmered 5 minutes or until everything became tender.  I took the chicken out and shredded with a fork.  I think I added a little pepper as it was cooking.  Don’t think I had other veggies…maybe a parsnip??  Not a big help, but may give you a start.”

Cooking soup fills my kitchen with the nostalgic scents of homemade comfort.  There is effortless pleasure in the whish-whish of peeling and the thunk-thunk of chopping and in the interesting textures and amazing densities of the vegetables.  There is visual enchantment in the bright orange and vibrant green along side the muted tones of cream. 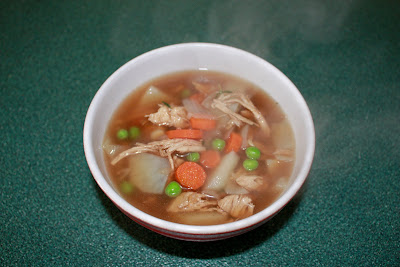 Ultimately, it’s about the soul satisfying taste of steaming hearty soup as it delights the tongue and fills the tummy.

Soup in all its ordinary uncomplicated splendour!