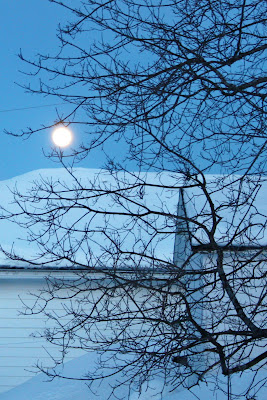 The First Peoples kept track of the seasons by naming each recurring full moon.   Aboriginal Nations chose names that accurately and poignantly described what the time of year meant to them.  The mid-winter moon in February was called:  Bony Moon, Little Famine Moon, Moon of the Raccoon, and Moon When the Trees Pop.

Other early cultures attached names to the February moon; names which had particular significance for them.  Trapper’s Moon, Moon of Ice, Storm Moon and Snow Moon.

This full February moon… what label would we use to encompass its winter beauty and bitter chill?  I wonder.
Posted by Carol Steel at 2:42 PM