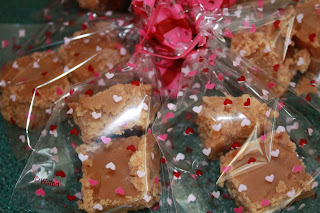 Who invented fudge?  According to folklore, fudge was a by product of a cooking accident in in 1886.  One myth says that the intention was to cook caramels, but the attempt was botched or “fudged”, thus inventing the candy and the name.  Other legends exist.
In my family, fudge, superior quality Brown Sugar Fudge was invented by my mother.  Her recipe was simple: 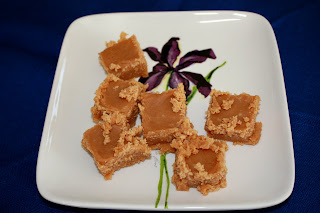 Brown Sugar Fudge
½ cup brown sugar
½ cup golden corn syrup
½ cup melted butter
1 cup evaporated milk
2 cups white sugar
Cook well, beat, cool, eat!
That’s it!  The “how” of what one actually did to create fudge wasn’t written on the smudged and yellowed recipe card, it was written in my mother’s brain.  She said one had to “develop a feel for making fudge, that fudge-making is an art.” 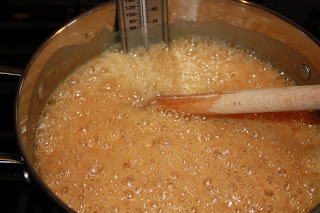 Her art consists of using a heavy bottom pot with high straight sides, so that the candy thermometer will fasten easily to the pot.  Also, fudge crawls up the sides of the pot, as it boils at a moderate steady rate over the entire surface.  The fudge boils until it reaches soft ball stage (236 degrees Fahrenheit or 115 degrees Celsius.)   This takes about 20 to 25 minutes or so.  If the fudge cooks too slowly, it can become a runny mess…useful for caramel sauce on ice-cream; if too quickly, it can morph into hard shards of candy…still edible, but not fudge.
My Mom says that fudge-making requires a good quality candy thermometer or an ability to use the “cold water test”.  And that fudge is more challenging if the day’s humidity is above 60 %.  Dryer days are best.
Once the fudge has reached the correct temperature, take the pot off the heat.  Remove the thermometer.  Have several people ready to beat the fudge. (Use the “no beat= no eat” threat!)  Taking turns so that arms aren’t injured, beat the fudge with a heavy wooden spoon.  She says “until it feels right”, which means until the fudge has cooled somewhat, starts to lose its glossy sheen, and your arm is really fatigued.
Very quickly, spread the fudge evenly in the buttered pan.  Failure to adequately butter the pan means having to gouge the fudge from the pan with a sturdy knife.  Edible but not pretty. Score the fudge into squares while it is still warm.
When the fudge has cooled, cut along the score lines, into 36 good sized pieces.  My Auntie says that “a pan of fudge is really just a one-serving size!”
Fudge will last up to a week if tightly covered.  Ours never lasts beyond 24 hours.
Enjoy!  It is the yummiest fudge ever.
Posted by Carol Steel at 8:35 PM

It is the most heavenly fudge you'll ever eat. I guarantee it. Carol