Gary In the Storm 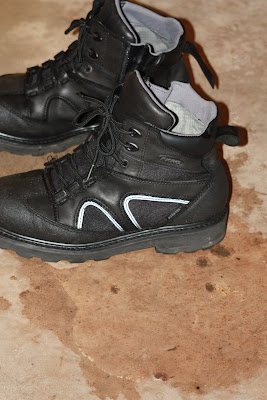 in the Storm
After supper last evening, left to go for a short ride on his motorcycle; met with his riding buddy, decided to head for Sussex and a coffee and chat, their usual routine.
All went well until they turned back toward home and ran into a quickly moving lightening storm near Salisbury.
Like all seasoned bikers, they stopped at the first sign of rain under the canopy of a service station and discussed the need for donning their rain suits.  They waited and because the rain appeared to have stopped, they decided “no rain gear” and headed again for home, a distance of 25 kilometres.
Summer storms move fast and can come up suddenly and violently.  Last night was no exception.  They heard the thunder and saw lightening rolling through the clouds over the city, as they approached.  And they got wet, very, very wet.
It rained nearly 30 millimetres in a brief time.  Forced to drive slower than one-third the speed limit because of water on the roads and visibility challenges, not to mention the discomfort of being literally soaked to the skin, it was a most unpleasant ride home.
At 11:15 pm, I saw him driving at the bottom of our street and ran to open the garage door.  Slowly, slowly I heard him navigating the floods of water pouring down our street; finally into the garage he came.  Everything was dripping!
was cheery as usual, exclaiming that it had been an adventure!  And wonder of wonders, his saddle bags didn’t have a bit of water in them; everything in them was totally dry—even his rain gear!
These photos are from ’s clothes last night, after he took them off in the garage.  Apparently, his waterproof boots aren’t waterproof.  Note the puddles on the floor after he dumped them out.  He hung his shirt over the garbage can to drip; it too made a puddle.
After a warm shower and a rum and coke, he was fine again.  His leather motorcycle gear—well, that’ll take a few days to dry and return to normal.  However, his rain gear is all ready to go again! 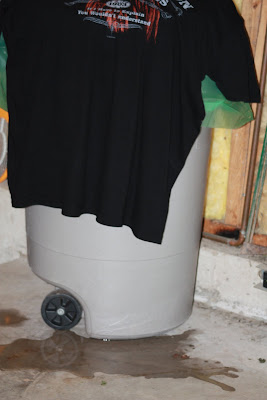